Cybils Nominee: Can I See Your ID: True Stories of False Identities

It's that time of year again--Cybils time! I'm a little late getting this plug in (you know--life and stuff interfering with my writing) but I wanted to mention it all the same. This will be my fourth year with the Cybils. After a year as a Round Two judge, I am back as a Round One panelist, which means a whole lot of reading and hopefully lots of great recommendations for this blog. I am serving on the Non-Fiction: Middle Grade & Young Adult panel (or NFMGYA for short.) You can see the rather impressive list of nominations here. Nominations will be accepted until the 15th of October, so there is still time to nominate your favorite NFMGYA title, or any title in ten different categories--including apps, for the first time. 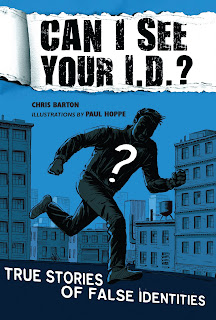 I've started off with Can I See Your I.D.? True Stories of False Identities, by Chris Barton and illustrated by Paul Hoppe. Chris Barton was a Cybils winner in 2009 in the Non-Fiction Picture Book category for The Day-Glo Brothers and a 2010 Picture Book finalist with Shark vs Train. His latest book introduces ten individuals--mainly teenagers--who for one reason or another pretended to be someone else. In some cases the motivation was chutzpah, in others career advancement, and in at least two survival. Each story is told in the second person, a narrative choice I really liked because it puts the reader directly into the text. It felt like reading a Choose Your Own Adventure story, where each turn of the page might have dire consequences. It's hard not to feel a little anxious when you read the line, "There's nobody you can tell the truth to--nobody you feel you can trust." I was familiar with a few of the individuals in this book: Solomon Perel (whose amazing deception was the subject of the film "Europa, Europa") John Howard Griffin (author of Black Like Me, which I had to read in high school,) Forrest Carter (whose The Education of Little Tree caused a furor with Oprah,) and Frank W. Abagnale Jr ("Catch Me If You Can.") But the rest were a revelation.

One thing Barton does particularly well is to throw the reader directly into the deception. Along with the use of the second person narration, each fraud is already in full swing when the reader joins. Keron Thomas, the sixteen year old train spotter who decides that he would like to drive a New York city subway train for a shift, is already standing on the 207th Street station platform waiting for his carriages when the story starts. While the individuals involved might have had plenty of time to plan how they were going to carry out their impersonations, the reader does not and needs to be ready to run with the situation from the get-go. Barton does take a small step back to provide some background information, but then it is back to the business at hand, which is basically, 'will you pull this off?'

Barton's extensive research for the book, which included interviews with some of the individuals still living, shows the seriousness with which he approached this subject. At the end of each story there is a "What Happened Next" explanation where the reader discovers the consequences of the deception. In his afterword, Barton seems to be directly challenging the reader with the opening question "Who do you think you are?" As middle schoolers and young adults, they might be asking themselves that same question. But further reading seems to indicate that Barton is actually questioning himself as a writer, for having the nerve to investigate these stories. Aside from raising the morality of the rights or wrongs of tricking people, Can I See Your I.D. is essentially about having "the nerve"; the nerve to trick people who are ready to be fooled, the nerve to survive when you are condemned to die, the nerve to investigate the truth in the hearts of our neighbors, and the nerve to sell someone your story.
Posted by Kara Schaff Dean at 10:17 AM