Get ready for the 2012 SLJ Battle of the Kids Books!

Who says February is a bummer? Imagine my joy this morning when my sleepy eyes spied the announcement in my Twitter feed that the 2012 BoB contenders had been announced! I adore the Bob's (also known more formally as the School Library Journal Battle of the Kids Books.) I love the guest judges. I love the monkey wrench of the Undead contender. I love the debate and conversation and second-guessing. I love that the BoBs is the metaphorical kick in the rear to my To Be Read pile. It's one final attempt to get to grips with the gems of the previous year before turning my attention to all the great new stuff ahead. I am particularly pleased to see that this year I have read no less than eight of the sixteen nominated titles (which, after the ignominy of a mere one last year, is heartening.) This is the first year where I will have already read at least one book in each of the brackets. And I still have at least a month to tackle the rest.

In terms of predictions.......going by the books I have read, I'm pulling for A Monster Calls, by Patrick Ness, based on an idea by the late Siobhan Dowd, which is hands down the finest book I've read in the last twelve months. 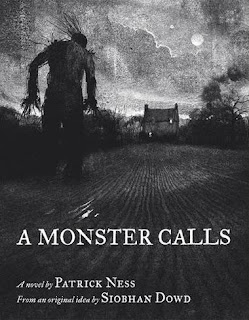