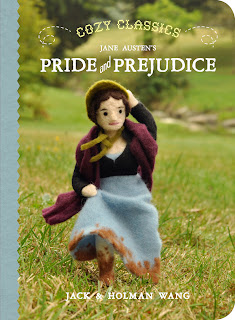 ........I am comparing board book adaptations of Pride and Prejudice. It is not a format which seems immediately obvious for Austen adaptations, but both BabyLit books and Cozy Classics are giving it a go. You can read what I think about them here. 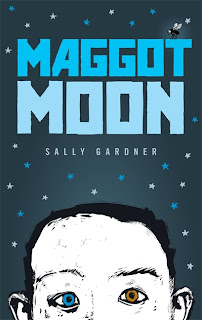 The landscape of this book is probably (hopefully!) unrecognizable to anyone who reads it: a brutal, bleak, totalitarian society in which the laws of intimidation and suspicion oversee all. It reads like a dystopian novel, yet the book is firmly dated in the past. 1956, to be exact, mentioned in a "blink and you miss it" moment. Where the story is taking place is unknown, although the singing of the first two lines of the hymn "Jerusalem" perhaps provide a clue. Standish Treadwell is living on the edge of society with his grandfather in Zone 7, where the undesirables of society--particularly political adversaries of The Motherland--are corralled until they disappear. The government is preparing a moon launch which will establish its position as the master race of all the world. Standish and his friend Hector, however, know the truth behind the lunar program.

This book, which won the Costa Book Award in the UK for best children's book of 2012, is surreal, disturbing, and compellingly original. The tone reminded me of Eugene Yelchin's Breaking Stalin's Nose, in which a brave child breaks through the dreamy haze of political misdirection. It also reminded me of Gunter Grass' The Tin Drum, although the narrative is much more straightforward, and Standish is an infinitely more reliable narrator than Oskar. Standish's point of view helps the reader navigate through what is at times a difficult read full of uncomfortable imagery and nightmarish scenarios. New York designer Julian Crouch provides black and white illustrations which in any other book might be labeled as spot illustrations, but in this case provide a subtle compliment to the text which does not fully make sense until the end. An unusual and unforgettable read.

Maggot Moon goes on sale in the United States today, Tuesday 12 February 2013. Thank you to Candlewick Press for providing me with a copy of the ARC.
Posted by Kara Schaff Dean at 6:26 PM 0 comments