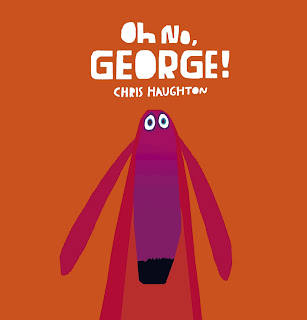 "Freedom is secured not by the fulfilling of one's desires but by the removal of desire.....No man is free who is not master of himself."

So says Epictetus, the Stoic Greek philosopher. But try telling that to a dog. A playful, rambunctious dog, who says he will be good--who hopes to be good! But who just can't help himself when tempted with cake, Cat, and dirt.

Author and illustrator Chris Haughton has followed up the quietly reassuring Little Owl Lost with this slightly more frenzied offering about George, a dog who, when faced with temptation gives in wholeheartedly. The story reads like a cumulative tale: Harry (not a dog) is going out, and he has commanded George to be good. George agrees, promising to not just be good but to be "very good". Yet George seems aware of his limitations, because Harry is no sooner out the door than George has gone from "I'll be very good," to, "I hope I'll be good." Each temptation is met against a serene backdrop of white space, as if reduced to a single, focused moment as dog eyes cake/Cat/dirt. "What will George do?" the narrator asks. The turn of the page, the assault of neon orange, and the words, "Oh no, George!" says it all. Harry eventually comes home, and George must face what he has done.

The charm of the book is that the reader knows what's coming, but it's still funny. The delicious anticipation of answering each "What will George do?" with a turn of the page to reveal--oh no!--a big mess, never gets old. Which is also what makes the ending so rewarding for the reader (more about that in the author interview.)  Haughton's use of bright orange each time George gives in to temptation is a wonderful way to visualize the madness which must take hold of this poor dog when he tries to be good but just can't make it.

The story ends with a cliffhanger, of sorts, but the back cover is, I think, the true conclusion. It is a picture of George, the recipient of a group hug from Harry and Cat. George is naughty. George is weak. But George is also loved. It's a wonderfully reassuring way to end the book, particularly for children who might very well see themselves in George.

It has been my pleasure to kick off the blog tour for Oh No, George. Be sure to visit the book's other stops in the US, the UK, Australia, and New Zealand.

As part of the tour, Chris took the time to answer some questions about Oh No, George!


NJFK: The title Oh No, George! really sets the tone of the book from the very beginning; a sense of inevitable mishap despite good intentions. And it is easy to see from the repetition of the phrase within the story why it makes a good title. But I thought the book could have also been called What Will George Do? based on the number of times George is faced with temptation, and the reader is asked to predict his response (particularly at the end.) Could you tell a bit about how you settled on the book's title?

CH: Yes! That was the other title that I was thinking of using. The very reasons you describe are what I liked about "Oh No, George!" The inevitable disaster combined with the worried face makes a more interesting image and picture in the mind. ‘What will George do?’ probably describes the book better but just didn’t seem to have as much comedy.

NJFK: I'm not a dog owner, but I am a parent, and I remember a time when my toddler's behaviour was not unlike George's. How intentional was the connection between dog and child when you were writing the book? Or did you just set out to write a funny book about a dog, and any similarity to childlike behaviour is mere serendipity?

CH: I set out to just write a simple funny story that is hopefully easy to relate to. When we can see George’s thought process weighing up whether he should eat the cake I think its something we can all empathise with whether you are a toddler or an adult. It seemed funnier to have that dilemma through the eyes and thoughts of a dog than a child or human. It’s true though that the things he enjoys doing and his level of self-control are probably about similar to a toddler’s. I think that helps give him his charm, he isn’t a complicated dog!

NJFK: Can you explain a little bit about how you created the illustrations? How do pencil and digital media work together?

CH: My drawings are quite rough and sketchy when I scan them in. What I am looking for in the sketch is a good expression or pose and I often find that the rougher and quicker it is made the more expressive it is. I colour and tweak the sketch and add the details on the computer while trying to retain the expressiveness of the original drawing.

NJFK: I love the quote by Epictetus at the beginning of the book. I went back and checked, and there is also a quote from Robinson Crusoe at the beginning of your previous picture book, Little Owl Lost. In each case the literary reference brings a sense of gravitas to what might otherwise be viewed as just a "simple" picture book story. Where did you get the idea to include these references? And were they in any way starting points for your stories (because we know that picture books are never merely "simple"!)

CH: They weren’t starting points, I came up with them after I came up with the stories in both cases. I was looking for ways to add something more to Little Owl Lost, a little epigraph or something to add a little more meaning. It was a friend that suggested looking at Crusoe. I looked around and found a great line that basically says ‘you don’t know what you’ve got until its gone’ but of course in great 18th Century English, I just liked the thought of putting an eloquent epigraph from Defoe alongside my little story about an owl falling out of a tree. They are so different but whether you are Robinson Crusoe or an owl who has fallen out of his nest its probably true to say you don’t appreciate what you’ve got until it’s gone.


For George I originally wanted to quote something from ‘the difficulty of being good’ by Gurcharan Das or from Buddhism about control of one’s mind but eventually settled on that one from the stoic philosopher Epictetus. I like the quotes and it’s something I want to continue in future books.

NJFK: At the end of the book you give the reader one more chance to predict what George does, but you don't reveal the answer. Do you know if he dug through the trash and just aren't saying, or are you giving the reader the opportunity to continue the story?

CH: I didn’t want to finish it. It would be too simple (and dishonest!) to have him be good at the end and too much of an easy gag to have him dive into the rubbish. The ending is neither and so it leaves everyone wondering what happens next. I was unsure about leaving it open but my sister who is a teacher of very young children loved the idea that it is left open so that afterwards they can have a class discussion. In the readings I have done we have great fun after the story deciding what George will do.

Personally I think he probably jumped in the rubbish. Sometimes there are things at the very bottom of the rubbish bin that smell so good it’s hard not have a little rummage!

NJFK: Which picture book illustrators do you particularly admire or whose work you especially enjoy?

CH: I like Leo Lionni for his simplicity, whenever I feel I’m overcomplicating something I will look at some of his books and see how it can be done more simply. I really love Kitty Crowther and Beatrice Alemagna's work for their drawn details and patterns. I love the humour of Tom Gauld, Neal Layton and Ed Vere. Many of my favourite illustrators are French; Chamo, Marc Boutavant, Olivier Tallec. There are so many nice young books for the very young published with Thierry Magnier and editions memo in France:
http://www.editions-thierry-magnier.com/
http://www.editions-memo.fr/

NJFK: Are there any authors you would like to work with, or do you prefer illustrating your own work?

CH: I think I would prefer to keep writing my own books. I’d feel uncomfortable working with a writer on a picture book because the process I have found to work for me involves working with the text and images at the same time and it’s very back and forth. I can’t really think of another way of really making it work for me. I think I would drive anyone else involved crazy!
A big thank you to Chris Haughton for taking the time to answer my questions, and also to the folks at Candlewick for providing me with a copy of the book to preview. As one last special bonus, I am pleased to offer a signed print from Oh No, George! (as seen above.) To be entered in the give away, all you have to do is leave a comment or share this post via twitter or facebook (and make sure you let me know about it!)

Update: Congratulations to Carol Rasco, the winner of the Chris Haughton print!