As the year draws to a close, it's time to list my 5 star books for 2010. I should preface this by saying that this list chronicles only chapter books and graphic novels (of which I read 71 this year,) and does not include the numerous excellent picture books which I read (a situation I really should rectify for 2011.) Books with a * next to them indicate titles published in the United States in 2010. Some of the books are re-reads, revisited either for book club or for fun. There are even a few adult titles included. They are listed chronologically as I read them.

Island of the Blue Dolphins by Scott O'Dell
Millicent Min, Girl Genius by Lisa Yee
Living Hell by Catherine Jenks *
Alchemy and Meggy Swann by Karen Cushman *
The Art of Racing in the Rain by Gareth Stein
One Crazy Summer by Rita Williams-Garcia *
The Hunger Games by Suzanne Collins
Bamboo People by Mitali Perkins *
Cosmic by Frank Cottrell Boyce *
Catching Fire by Suzanne Collins
Sweetness at the Bottom of the Pie by Alan Bradley
Monsters of Men by Patrick Ness *
The Murder of Roger Ackroyd by Agatha Christie
Smile by Raina Telgemeier *

You know, the list of 4 star books is pretty good, too. They are:

Miss Spitfire: Reaching Helen Keller by Sarah Miller
The Cay by Theodore Taylor
The Strange Case of Origami Yoda by Tom Angleberger *
Boom! by Mark Haddon *
11 Birthdays by Wendy Mass
Yours Truly, Lucy B. Parker: Girl vs. Superstar by Robin Palmer *
The Case of the Gypsy Goodbye by Nancy Springer *
Doctor Who: The Forgotten by Tony Lee, Pia Guerra and Nick Roche
The Knife of Never Letting Go by Patrick Ness
Mockingjay by Suzanne Collins *
Paranormalcy by Kiersten White *
The Ask and the Answer by Patrick Ness
When you Reach Me by Rebecca Stead
The Secret Life of Ms. Finkelman by Ben Winters *
The Homework Machine by Dan Gutman
Alvin Ho: Allergic to birthday parties, science projects and other man-made catastrophes by Lenore Look *
The London Eye Mystery by Siobhan Dowd
Mrs. Frisby and the Rats of NIMH by Robert O'Brien
Numbers by Rachel Ward *

And there you have it--the best reading that 365 days had to offer. May 2011 be filled with just as many--if not more (a girl can be greedy)--great books. Happy New Year, folks!
Posted by Kara Schaff Dean at 10:52 PM 4 comments 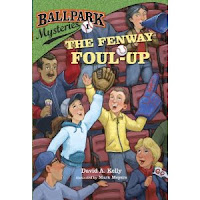 Perhaps it's petty of me, but I cannot deny that I took great pleasure in discovering that the first title in the new "Ballpark Mysteries" easy chapter series is The Fenway Foul-up. The book based at Yankee Stadium--book number 2. Looks like the American League East is already shaping up with the Red Sox on top, at least in terms of chapter books. The book pubs in February 2011--just in time for spring training.
Posted by Kara Schaff Dean at 4:24 PM 0 comments

Okay--so I meant to get this posted right after Thanksgiving. But there is still plenty of time to share a Christmas picture book. While shiny copies of Dewey's, Marley's and Fancy Nancy's holiday escapades are being showcased at your local bookstores, these older classic are not too be missed, so be sure to check those library shelves. They might be the dog-eared leftovers on the display table, but like Charlie Brown's twig of a tree, they have much to offer.

So, in no particular order, I present my favorite Christmas picture books: 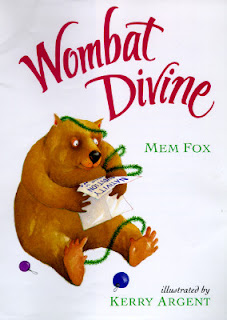 Wombat has waited a long time to be in the annual Nativity play, and now he's finally old enough. The problem is that he is ill-suited for every part: he's too heavy to be the Archangel Gabriel, too clumsy to be the innkeeper, and too short to be one of the Wise Men. With all the parts allocated to more suitable animals (and I do mean emus, koalas, and bilbys,) it looks as if Wombat will be sitting out this year's play, too. Until....inspiration strikes. This is a sweet tale from one of Australia's greatest contributors to children's literature.

We Were There by Eve Bunting; illus. by Wendell Minor

Let me clarify--there aren't just illustrations featured in this unorthodox Nativity story. There are paintings. There aren't many Christmas books which can boast a scorpion on the front cover (I can't think of any others) made sacred by the inclusion of the Christmas Star glowing beneath the tip of the scorpion's stinger. If Wendell Minor's stunning paintings of rats, tarantulas, and warty toads aren't enough to distinguish this Christmas book (you can see some of the other paintings here,) then have a read of Bunting's text, told in verse and from the point of view of each creature, making their way to the stable to worship the Christ child. This unique perspective on a familiar story makes a poignant statement about the relevance of Jesus' arrival, not just for the good and the easily lovable (i.e. the ox and lamb,) but the lowly inhabitants of the dark, as well. 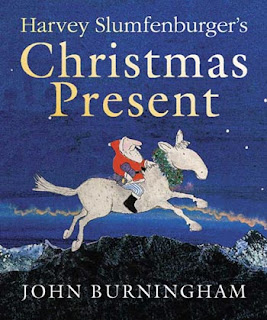 Santa's had a long night, and he's knackered. He no sooner finished his rounds, gets his reindeer in bed, and dons his pajamas, before he realizes that he's missed delivering a gift. And of course, the gift is for Harvey Slumfenburger, who is poor and will get no other gifts but the one from Santa. And he lives in a hut. At the top of the Roly Poly Mountain. Which is far, far, away. So there's nothing else for it but for Santa to deliver that gift. Not wanting to wake the reindeer, he tosses his red coat over his jammies and sets off by foot for Harvey Slumfenberger's hut. It's a long and arduous journey requiring many modes of transportation, but Santa will not be deterred. And with the final five words of the book, John Burningham shows why he is a master at writing for children. 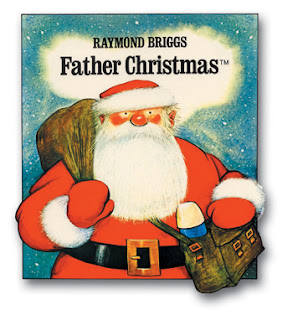 While Burningham's Santa is a dogged and dutiful man, Brigg's St. Nick is no jolly old elf. From the moment his alarm goes off on Christmas Eve, to his final grumbly blessing, Father Christmas looks as if he'd rather be anywhere than delivering presents on a cold and snowy night. As he preps his thermos, feeds the cat, and locks his front door, he could be heading off for a shift at the local factory.  The humor in this books is generated by the rather working class perspective to Santa's story, told in graphic blocks like a comic book. Father Christmas has to work around restrictive chimneys (or none at all--I particularly like the image of him trying to squeeze out of the top of a cooker,) try to avoid roof-top aerials (remember them?!) and tripping over cats, and in true British fashion spends most of the book complaining about the weather. And when he gets home, he still has to make his own Christmas dinner! Evidently this Santa is a bachelor. And, without a doubt, the hardest working man in the world. 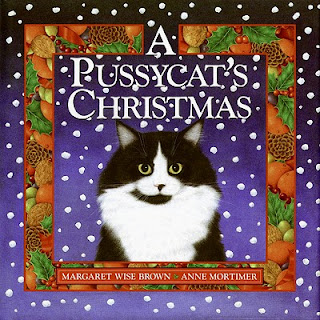 This book was originally published in 1949, and then re released in 1994 with illustrations by the incomparable Anne Mortimer. She is, for my money, the best illustrator of cats. From cheeky, to contemplative, to serene--her ability to capture their essence is amazing. Brown's understated yet precise description of the sounds and smells of a Christmas Eve in preparation, makes for a quiet, almost reverent, reading experience.

The Church Mice at Christmas by Graham Oakley 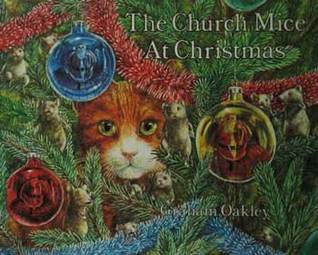 The Church Mice would like to plan a slam-dunk Christmas party at the church, but they are having trouble procuring funds. Raffling off Sampson doesn't raise much--particularly when he returns to the church and the mice have to refund the money. And caroling is fraught with danger on a busy high street crowded with shoppers. Raiding the choirboys' stalls for abandoned sweeties produces no dividends either. When Arthur and Humphrey make the rather rash declaration that Father Christmas will be visiting the vestry, things almost take a turn for the riotous as antsy church mice find their holiday disappointment difficult to contain. But all ends well--and humorously--for the church mice. As ever, this book is filled with detailed illustrations which are as much of a joy to inspect as the story itself.
Posted by Kara Schaff Dean at 10:41 PM 3 comments