Rave Review: The Lion and the Mouse by Jerry Pinkney 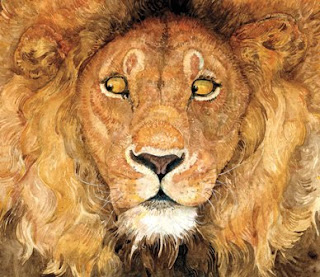 My list for 2010 Caldecott nominations starts right here! Jerry Pinkney has illustrated some beautiful picture books over the course of his long, distinguished career, but with this retelling of the famous Aesop fable, he has really raised the bar and created a stunning piece of art. Even the physical book itself exudes craftsmanship as the slightly thicker paper used gives the book a feeling of quality and distinction. Pinkney's decision to tell the story wordlessly is a natural choice; the original required minimal text to tell how the one kind deed from a creature in power is his ultimate salvation. Pinkney also reveals a back story, in where family is the focus, that strengthens the poignancy and immediacy of the original fable. This is a book where the story literally runs from cover to cover--starting with the mighty, almost imposing image of the lion on the front, and ending with the less imposing yet equally magnificent portrait of the mouse of the back. Read it and be wowed by the beauty of the illustrations, the directness of the interpretation, and the wisdom of the composition.
Posted by Kara Schaff Dean at 1:42 PM 2 comments 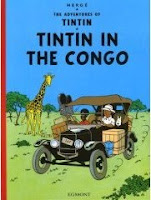 The National Coalition Against Censorship blogs today about the decision by the Brooklyn Public Library to remove Tintin in the Congo from its circulating collection. They will still keep the book, but it will now be housed in a special collection. This is basically the age-old compromise for librarians when faced with material of a "difficult" (i.e. controversial) nature: make the book available, just make it difficult to find. Although most librarians probably consider themselves as protectors of intellectual freedom (I know I do) and like to think that they would fight to the death to allow readers access to a book--any book!--(fortunately I've not yet been asked to do so,) it is probably fair to say that most librarians also choose their battles. Books like To Kill a Mockingbird, The Diary of Anne Frank, even the Harry Potter books, have cache, and it is easy to imagine most librarians standing up for these classics. But Tintin in the Congo has had a hard time finding defenders. I blogged about this issue in 2007 when Little Brown made the decision not to republish the book in the United States, despite the fact that the entire Tintin collection was at the time being reissued as a box set. And not having read the book myself (how can I? It is not easy to locate in this country,) I cannot comment on its historical or literary value. In the case of Tintin the Congo, I now have the feeling of collusion between publishers and libraries who have effectively between them made this book unavailable to anyone, buyers or borrowers. That is neither honest nor good.
Posted by Kara Schaff Dean at 12:14 PM 5 comments

.....after opening his magic pink refrigerator, and visiting New York and Paris, Dodsworth arrives in London in November. I have just this to say--please come to Boston!
Posted by Kara Schaff Dean at 4:24 PM 2 comments 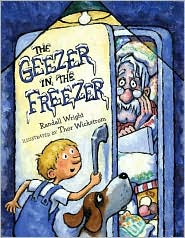 Okay, when I saw the title of this book in the Publisher's Weekly Fall Children's preview I got excited because I had images of cockney wide-boys dancing in my head. One look at the cover has disabused me of that notion, and a visit to Urban Dictionary has enlightened me to the fact that "geezer" is a term used in the US as well as the UK, although the connotation is completely different. I guess I've watched too many episodes of "The Fast Show"to think of a geezer as a crotchety grandpa. That being said, "geezer" is still one of my all-time favorite words, and so as long as this story bears little to no resemblance to The Shivers in the Fridge (creepiest. children's. book. EVAH), this book just might live up to the promise of its title.
Posted by Kara Schaff Dean at 3:14 PM 1 comments

You Read to Me, I'll Read to You Meme

Here are a couple of visually striking picture books which touched NMD and I differently. I'll start with Ed Young's Hook, which is an Ugly Duckling tale of sorts. It tells the story of a 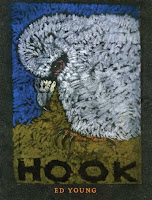 n eaglet which is raised by chickens after his abandoned egg is mistakenly given into their care. It becomes clear to the chickens that Hook is not meant for Earth, and they enlist the aid of a Native American boy to help Hook find his wings. The narrative is told in short, economical sentences which say just enough to move the story along. The illustrations have a sketchy, almost hurried look to them, and like the text seem to portray so much with so little detail. It's a completely different style from what Young used in last year's Wabi Sabi, which was a complex story richly illustrated. I loved this one. It reminded me of Molly Bang's Goose.

How Robin Saved Spring is a great example of judging a book by it's cover. It's hard to resist such a beautiful 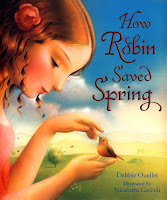 y delicate image. Nicoletta Ceccoli's illustrations have an other-worldly quality about them which support this original fairy tale quite well. The story tells of Lady Winter and Sister Spring who take turns rising and sleeping over the course of a year. One year, Lady Winter decides that she would like the world to be in winter all year. So she makes a magic blanket which keeps Sister Spring asleep past her regular time. If you can get past this slightly evil premise--sleep and death are too closely associated here for my comfort--then you will enjoy the attempts of various animals to wake up Sister Spring and the punishments which Lady Winter bestows upon them. It takes clever little Robin to save the day, as the title implies. In a perfect example that adults are overly squeamish, NMD liked this very much and felt that Lady Winter was simply "mean". No hidden undertones for her!

Don't forget to visit The Well-Read Child, which is hosting this meme.
Posted by Kara Schaff Dean at 10:15 PM 0 comments

You read to me, I'll read to you Meme 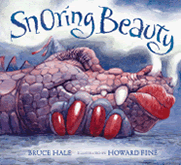 This week NMD and I have combined older titles with newer. While she makes her way through Mr. Popper's Penguins by Richard Atwater, I have been on picture book duty. Here's the current list, some of which I have already commented on.
I read to NMD:
1000 Times No, as told by Mr. Warburton
Blueberries for Sal by Robert McCloskey
Funny Farm by Mark Teague
Grumpy Grandpa by Heather Henson, illus. by Ross McDonald
Marley Goes to School by John Grogan, illus. by Richard Cowdrey
One by Kathryn Otoshi 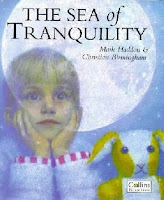 Sea of Tranquility by Mark Haddon, illus. by Christian Birmingham
Sir Cumference and All the King's Tens by Cindy Neuschwander, illus. by Wayne Geehan
Snoring Beauty by Bruce Hale, illus. by Howard Fine
Vunce Upon a Time by J. Otto Seibold and Siobhan Vivian
This week's highlights include Sea of Tranquility, which is a personal favorite. If you think you've heard the author's name before, well you probably have. Before Mark Haddon became internationally famous for The Curious Incident of the Dog in the Night Time, he wrote this gentle, fond picture book about his own l 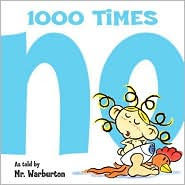 ove affair with the moon. The book has been re-released for the fortieth anniversary of the lunar landings as Footprints on the Moon.

No surprise that NMD liked 1000 Times No--she is eight after all! It is an amusing and straightforward story of a toddler who wants to make himself absolutely understood by declaring "no" not once, not twice, but 1000 times in 1000 d 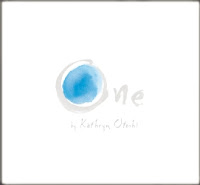 ifferent ways. Fun to pore over with your own strong-willed child.
This weeks' most interesting concept book is Kathryn Otoshi's One. It is essentially an anti-bullying story. But the way that she combines colors and numbers--everyday teaching tools for young children--with word play for the grown-up reader is a novel approach to a subject which is not always successfully tackled.
Don't forget to visit The Well-Read Child, which is hosting this meme.
Posted by Kara Schaff Dean at 10:12 AM 0 comments

Reading Radar--what's new for the fall

I've just spent a thoroughly pleasant hour or so perusing a new Scholastic catalog, and I have discovered that a lot of my favorite series have new books 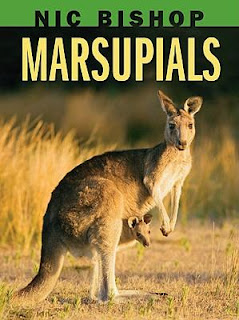 coming out in September and October! I will be making space on my To Read Pile for:

Julian Rodriguez: Invasion of the Relatives by Alexander Stadler
It's been a long wait for this sequel to Trash Crisis on Earth
Marsupials by Nic Bishop
After Spiders and Moths & Butterflies I'm really hoping that Mr. Bishop sticks with mammals for awhile!
Dog and Bear: 3 to Get Ready by Laura Seeger
And the third book in the series. Dog and Bear: Two's Company, the sophomore offering in this series, was not as strong as the debut. Here is hoping for a return to form for Dog and Bear. 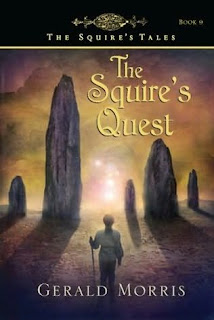 Very Happy for this return to the Squire's Tales after a few offerings from the Knights' Tales for younger readers. 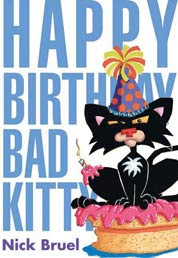 Happy Birthday Bad Kitty by Nick Bruel
You can never have too much Bad Kitty!
How do Dinosaurs Say I Love You? by Jane Yolen and Mark Teague
The same way they get well soon, go to bed, and go to school--with much good humor.

Mr. Putter and Tabby Spill the Beans by Cynthia Rylant 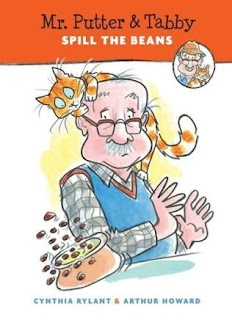 I love how Rylant and illustrator Arthur Howard have made the quiet life of this Octogenarian and his cat so appealing. In our house, the high octane Henry and Mudge too a distant back seat to Mr. Putter and Tabby.
I Spy Fly Guy by Tedd Arnold
Fly Guy's popularity simply grows and grows in my library, and considering the frequency with which books in this series are being released, I would guess that we are indicative of a wider trend.